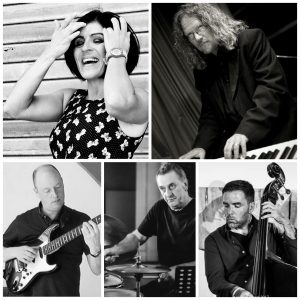 A Tribute to Anita O’Day – Anita O’Day, an american jazz singer widely admired for her sense of rhythm, improvisation and dynamics, presented herself as a hip jazz musician. Described in The Penguin Guide to Jazz Recordings as ‘ the toughest, most dramatic and most fiercely swinging of all jazz singers’ Anita O’Day is probably best remembered for her performance at the 1958 Newport Jazz Festival in the States when she wore a spectacular black dress, white gloves and large hat, an event which was captured in the Jazz On a Summer’s Day documentary (1960) which made her an international superstar.

Annika has put together a fine band with some of the best musicians in the South West to authentically reproduce Anita O’Day recordings.  They focus mostly on recordings from Anita’s collaboration with The Oscar Peterson Quartet ‘Anita Sings The Most’ but also O’Day classics such as Sweet Georgia Brown and Tea For Two. The band features Annika Skoogh on vocals, UK’s best Oscar Peterson interpreter – pianist Craig Milverton (British Jazz Awards winner in 2010), Mike Eaves (guitar), Jim Rintoul (double bass) and  Coach York (drums). The band has recently performed at a sell-out show at North Devon Jazz Club in Appledore and have further performances lined up this year, please see the live show page for their upcoming gigs.

We use cookies to ensure that we give you the best experience on our website. If you continue to use this site we will assume that you are happy with it.OkPrivacy policy